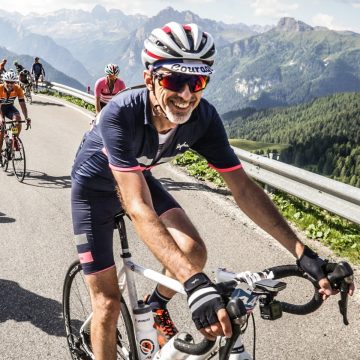 Sean has participated in:

Since starting Le Cure, Sean has cycled the equivalent of the height of Mount Everest 5.33 times, and cycled around the m25 8.43 times! That's 47,200 vertical metres and 1,586 kilometres.

2018 - My first Le Cure highlight was surely winning the Green Cap on stage 3. I wore it with pride on stage 4. 2019 - Winning another Green Cap on stage 1, and both the climb and the descent of the Col du Galibier. The climb because it's both brutal and beautiful, the descent because it was in a big thunderstorm! 2020 - Winning a Green Cap, although credit is mostly due to Steve Chester who hauled me up the last mountain.

2018 - The ride back down the valley into a headwind on stage 3, I thought that would never end..... 2019 - The Col de la Madeleine. I felt like I was dragging a sack of cement behind me. Found out later I had a slow puncture. That and the heat nearly did for me. 2020 - My worst every day on a bike, climbing the Col de la Croix de Coeur went on, and on, and on..

Don't panic, enjoy yourself, take advice, listen to the prep talks each day, make friends, smile :-) Oh, and drink and eat regularly during each day. You will regret it if you don't.