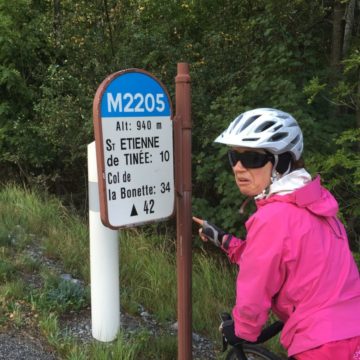 Mary has participated in:

Since starting Le Cure, Mary has cycled the equivalent of the height of Mount Everest 4.05 times, and cycled around the m25 6.18 times! That's 35,840 vertical metres and 1,162 kilometres.

Hard to pick just one but it would have to be on the fourth day when I was the last one up Alpe D-Huez, I had some way still to go and my willpower was ebbing while night was closing in fast, and to my delight and relief some of the others who had already finished came back to galvanise me onwards and then followed me all the way back to the top to make sure that I made it – as if they hadn’t all cycled hundreds of kilometres themselves already, they are all legends!!

Third day, with two days of saddlesores and fatigue already in the bag, facing the steep first face of the Col D’Izoard, and seriously wondering if I would be able to make it all the way to the top…

Pack your chamois cream first so you don’t forget it like I did – everything else can be begged, borrowed etc, but not that!!