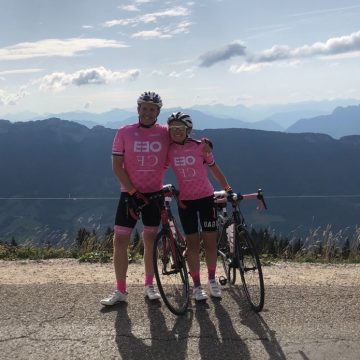 Claire has participated in:

Since starting Le Cure, Claire has helped Curistas cycle the equivalent of the height of Mount Everest 8.09 times, and around the m25 12.57 times! That's 71,538 vertical metres and 2,363 kilometres.

Keen cyclist-turned-supporter this year as I have a baby Curista on board (due Jan 2020). Luckily I got a head start with fundraising by running the London Marathon before I knew I would be sitting out the cycling.

- Cycling up Les Lacets de Montvernier in 2015 having watched the Tour de France go up there earlier that year and been petrified about the climb. Turns out it was great fun and very do-able. - The amazing sense of comradery on each and every Le Cure. - Celebratory beers at the top of Alpe d'Huez. - Meeting James Sullivan who I first described as 'the guy with the nice bike', before I knew his name...

Running out of steam less than 1km from the top of the Col du Glandon in 2015.